News / Celebrating the life and legacy of Dr Zaki Badawi 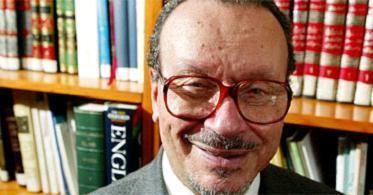 Friday 14th January will mark what would have been the 100th birthday of Faith & Belief Forum co-founder Dr Zaki Badawi, who passed away in 2006.  The Faith & Belief Forum is just one part of Dr Zaki Badawi’s impressive legacy, who established the organisation (then known as the Three Faiths Forum) in 1997, with Sir Sigmund Sternberg and Revd Dr Marcus Braybrooke.  Zaki was born in Egypt in 1922 and moved to the United Kingdom in 1951 to complete his studies in London. After his education he taught Muslim Thought and related subjects across the globe and established a Muslim College in Malaysia.  He returned to the United Kingdom, becoming Chief Imam of the London Central Mosque in Regent’s Park. During his time there, he encouraged other imams to use English in sermons and to discuss British life, to make it easier for immigrant Muslim communities to settle in and find acceptance in their new home. In 1986, Zaki established, and became the director of, the Muslim College in London. This was a postgraduate school for imams and Muslim teachers, with a curriculum focusing on both Islamic and Western societies.   Throughout his career, Zaki also negotiated with the Bank of England to establish the first Islamic financial institution licensed in the UK, allowing for mortgages compliant with Islamic beliefs. Zaki made many appearances in British media and newspapers, discussing a wide range of issues, such as Muslims in Britain, FGM, democracy, human rights, providing important insights for all. He also stood in the face of extremism, being outspoken following the attacks on September 11th and the London bombings.   Perhaps Zaki’s most important legacy came from his work in interfaith relations. He was known for creating strong relationships with leaders of all different faiths and beliefs, regularly holding meetings in churches and synagogues, and became Vice Chairman of the World Congress of Faiths. He was also the key advisor to the Prince of Wales on Islamic issues, helping to establish a better connection between the Royal Family and Muslim people in Britain. This led to him being awarded an honorary knighthood in 2004, one of the only Muslims at the time to be given such an award because of their work in faith and community issues rather than in other fields such as business or medicine.  In 1997, Zaki got together with his friends Sir Sigmund Sternberg and Revd Dr Marcus Braybrooke as they believed it was important to have more Muslim involvement in interfaith dialogue. They soon established the Three Faiths Forum to encourage friendship, goodwill and understanding between Muslims, Christians, and Jews. This organisation was the first forum of its kind and provided completely new opportunities for people from these faiths to address issues together, mirroring much of what Zaki had been working towards throughout his life.  The Three Faiths Forum evolved into the UK’s leading interfaith charity and changed its name to the Faith & Belief Forum in 2018. From local community groups and schools to workplaces and university students, the organisation spans all sections of society, engaging individuals across difference, establishing links, creating connections between people from different backgrounds.  As we mark his 100th birthday, we at the Faith & Belief Forum strive to continue Dr Zaki Badawi’s legacy in our work. His vision of a more connected society lives on in our programmes and events that reach and transform the lives of thousands of people from all faiths and beliefs.