News / Celebrating the life and legacy of Sir Sigmund Sternberg

Celebrating the life and legacy of Sir Sigmund Sternberg

Tributes to Sir Sigmund have poured in, celebrating his life and incredible contribution to the world of interfaith. The many reflections and memories paint a picture of a tireless campaigner and true visionary, but also of a man who was a warm, kind human being and loyal friend.

Read people’s tributes below, and please send us any thoughts and memories you might have yourself.

Siggie never stopped believing in and helping to make the world better and inspired so many people. He was never backward in getting people to do the same.  I was at St James’s Palace with him once when he told the Prince of Wales in no uncertain terms that he should do more to promote the Rotary movement, a cause which Siggie was passionate about. He was such a dear friend and valued mentor to me and promoted the work of the Anne Frank Trust, of which he was one of our first Patrons, whenever he had an opportunity. Siggie’s brilliant mind was quietened in his last years, especially after the loss of his beloved soulmate and sweetheart Hazel. The world is already a poorer place without Siggie but he will continue to look down with huge pride at the wonderful work of the 3FF.

I first met Sir Sigmund Sternberg with his late wife in June 2008.

The location and reason were both consistent with his abiding passion for building more harmonious relations between people of different faiths. I was speaking at St Ethelburga’s Centre for Reconciliation and Peace on “Managing Faith in the Workplace” at an event organised by the Three Faiths Forum. We exchanged cards, and a few days later he invited me to visit him. From that came my own involvement with the Three Faiths Forum.

Sir Sigmund was already 87 when I met him, when most people have long slowed down. In contrast, my abiding memories of him over the last eight years are all about his total commitment to his mission, without letting the infirmity of advancing years divert him. I was also continuously surprised by how he seemed to know everyone who was anyone!

If in the next three decades of my own life I can accomplish even a fraction of what Sir Sigmund achieved in the equivalent time, I will feel my life has been well spent.

Mohammed Amin MBE, Member of the Consultative Council of the Three Faiths Forum and Co-Chair of the Muslim Jewish Forum of Greater Manchester

I am so sorry to hear Sir Sigi has died. He was the kind of person who it always seemed would go on forever, like HM the Queen.

I joined The Times in 1987 and met Sir Sigi soon after, at a reception for different faiths at Lambeth Palace, after George Carey became Archbishop. They worked closely together. From that meeting, Sigi became a trusted friend, advisor and mentor. He was generous with his time and indefatigable in his networking.

He told me a little of his past, and I was awestruck but what he had made of his life, from his beginnings as a refugee here, interned in the War because he was not a British citizen. Yet, having fled from persecution, he would have been willing to serve in the British Army had he been allowed.

He also used to tell me how in his home, he would pass the churches holding Mass, with their beautiful music. He would stand at the door and listen, and it helped plant the seed of his love for Christianity which led to the incredible interfaith work he did.

His need for recognition from the establishment was endearing. My own beginnings were nothing like his of course but I was unusual at The Times in being neither an Oxbridge graduate nor privately-educated. I came from a small country village of 60 souls in Staffordshire where my father was the parson. So like him in some ways, I was very much an ‘outsider’ in London. He seemed to recognise this and it perhaps motivated some of the help he gave me. He was so generous with his introductions to key elements of this ‘establishment’ and smoothed my path in many directions in the early years of my work on The Times.

He also nurtured in me an enduring love for Judaism, about which I had known very little. He invited me to Friday night services, to Friday dinners with his family, to other meals at his home…. He was really really amazing. I missed him terribly when he retreated from public life a few years ago.

I first met Siggy when I was seeking for support for the Charity Healthprom some year ago and, as a result, he provided the Charity with an office in his office premises on very favourable terms and also provided financial support from time to time and he and his wife Heather became long standing friends attending our annual Rostropovich fundraising concerts.

As key member of the Rotary Club of London (RCL) he suggested that I should become a member too and eventually I joined them, where after only three years as a member he proposed and supported me as President. He attended regularly as long as his health allowed him and made an enormous contribution to the club by bringing eminent political and society leaders to the club’s weekly luncheon. I recall any number of these meetings when Siggy would bring and introduce a number of MP’s and other distinguished guests. He also contributed by inviting political and business leaders to speak at the club.

The Club will miss him not only as a person and as a friend but for the real difference he made to the club. I always admired his incredible energy and his kindness to me.

I shall always remember Siggy ringing me  when my wife died

“I just wanted to make sure you weren’t by yourself,” he said

I shall never forget that kindness.

As a young man, many years ago, I had the honour of meeting and sharing some time with Sir Sigmund Sternberg, listening to him was a pleasure, he was humorous, humble and gentle. He was a man with a clear vision, with his energy and passion he was committed to the world of peace building, harmony and respect. He taught me the importance of building relationships with trust as the foundation. He worked sincerely with people from different faith communities and indeed was a pioneer of the interfaith movement. We have all lost a great soul, i was blessed to be in his presence and to be touched by his hand.

I had known Sir Sugmund Sternberg since the mid-90s, he was truly a gem of a person.

I visited his home a few months ago. Despite his ill health and frailty, he kept asking me about Dr Zaki Badawi and the Muslim Jewish relations.

He truly was a giant, a very genuine and sincere man who’s loss will truly be felt within the interfaith community.

I was very sorry to hear from you of the death of sir Sigmund Sternberg this week. I would just like to record what an impression he made on me while I was working as a British diplomat in the early part of the century as Director of Protocol in the FCO. The Marshal of the Diplomatic Corps in the Palace and I worked closely with him, notably  in arranging meetings at St James’s Palace of the 3FF involving in particular Arab Ambassadors in London in the fraught period after 9/11, when his quality of forcefulness in requesting official help and support – you could not say no to him! – and also his sheer likeability were very evident. I also remember his role in inviting ambassadors of all persuasions to visit his central London synagogue to mark the anniversary of the return of the Jewish community to England in the 1650s (I think). I attended too, the first time I had been to a Jewish religious ceremony. He later asked me to join the Advisory Board of the Forum after my retirement, which I did with pleasure and continued for some years. I shall always remember him with affection and admiration.

I am a great believer in your work and wish you all success with it.

I am deeply saddened to hear of the passing away of Sir Sigmund Sternberg.  He will be sorely missed.  I was first introduced to Sir Sigmund by my mentor and Co-Founder of the Three Faiths Forum (3FF), Shaykh Dr Zaki Badawi KBE in 2004.  What struck me about Sir Sigmund was his immense energy, drive and passion for building strong interfaith relationships, not just between Christians, Muslims and Jews but also the broader communities of faith that inhabit our beautiful country and our world.  Sir Sigmund was a towering figure in the interfaith world.  His legacy and vision for a better world of understanding, mutual respect and trust between faiths will continue to be delivered by the 3FF.

My prayers and thoughts are with the Sternberg family and friends at the 3FF at this sad time.

I am very sad to read of the death of Sir Sigmund Stenberg. My colleague, Kate Crowe, and I had liaised with Sir Sigmund and his wide range of contacts for many years in furthering our FCO work with communities across the world and at home in the United Kingdom.  It is doubly sad that just a few weeks before the loss of Sir Sigmund we also heard the sad news of death of Kate Crowe too.

If anyone deserved to win the Times/Sternberg Active Life award it was Sigi himself. He first approached me more than a decade ago with the idea of getting Rupert Murdoch to co-sponsor the award, and from that moment on, he never let go in his determination to see the scheme through. Under James Harding, The Times was persuaded to take up his idea, and the award became a yearly feature which attracted a lot of interest from readers and even from government ministers. Winners included men and women, sometimes in their late 70s and 80s, who were still doing extraordinary things – campaigning for the victims of torture, travelling around the country to help severely autistic children or leading veterans back to the Normandy beaches every year to commemorate D-Day. Sigi put up half the prize money of £10,000 himself.

Sir Sigmund took an active interest in each award, and even tried lobbying a bit for his favourite candidates – but was wise enough to leave The Times to make the final decisions. He was indefatigable in his enthusiasm for the causes he championed, and was dogged enough to persuade the Chancellor of the Exchequer to host a reception in 11 Downing Street for the winners each year. It is a fine memorial to a man who himself, in old age, was as active and possibly even more philanthropic than he had been in his younger years.

Everyone at Women’s Interfaith Network joins me in expressing our sorrow at the passing of Sir Sigmund Sternberg, a colossus in the world of interfaith dialogue.

In a traumatic post-war Europe, which is still to this day troubled by fear of “the other”, it took a man of extraordinary vision and foresight to create, in his latter years, an organisation based on the premise that to talk to “the other”, to understand “the other” and thereby eventually making friends with “the other” is in fact the only way forward for humanity.

He reminded us of our duty as human beings and citizens to help create a civilised society by taking steps that many thought could not be taken.

May his legacy last for generations to come, in all religions and faiths. 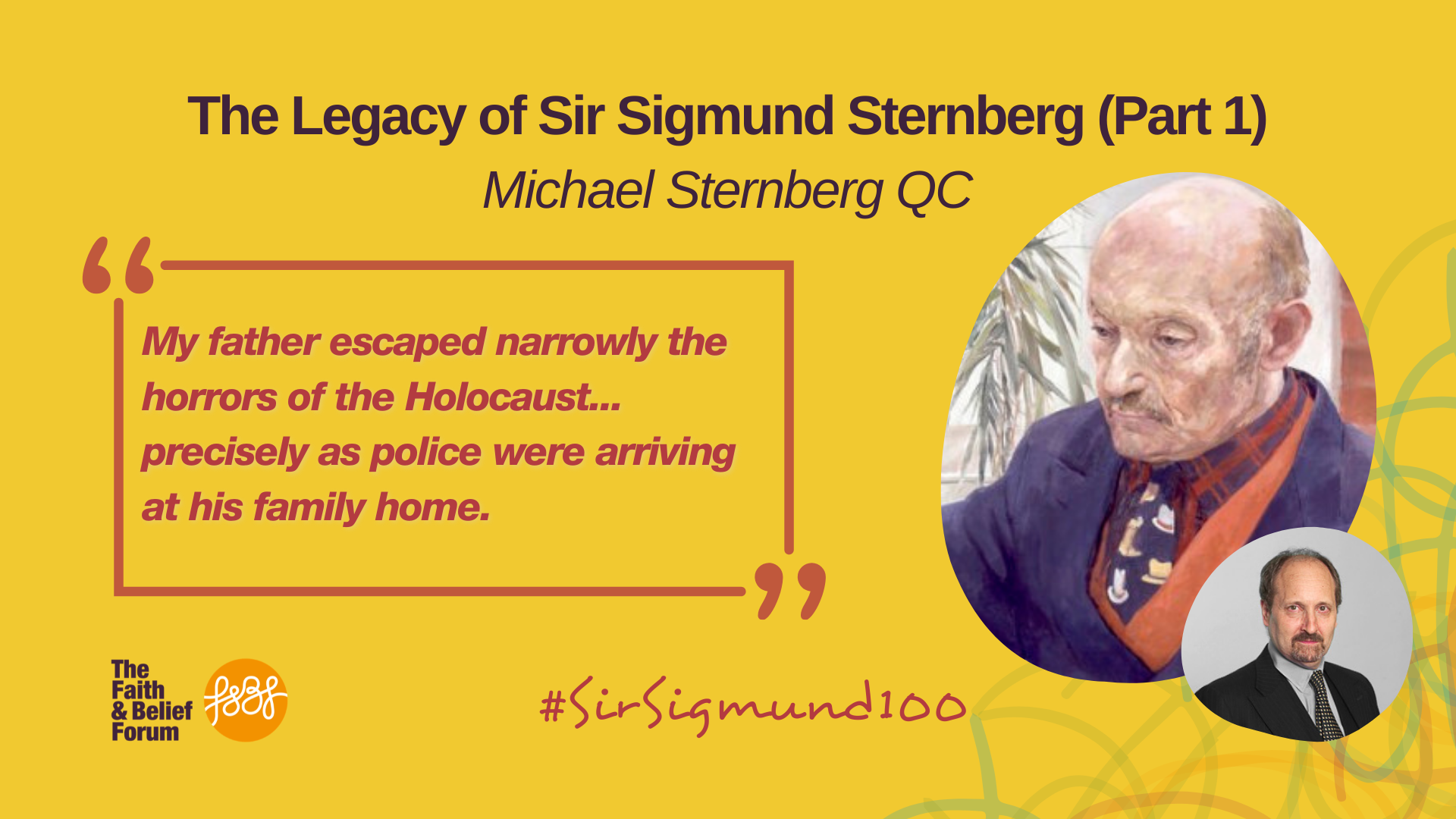 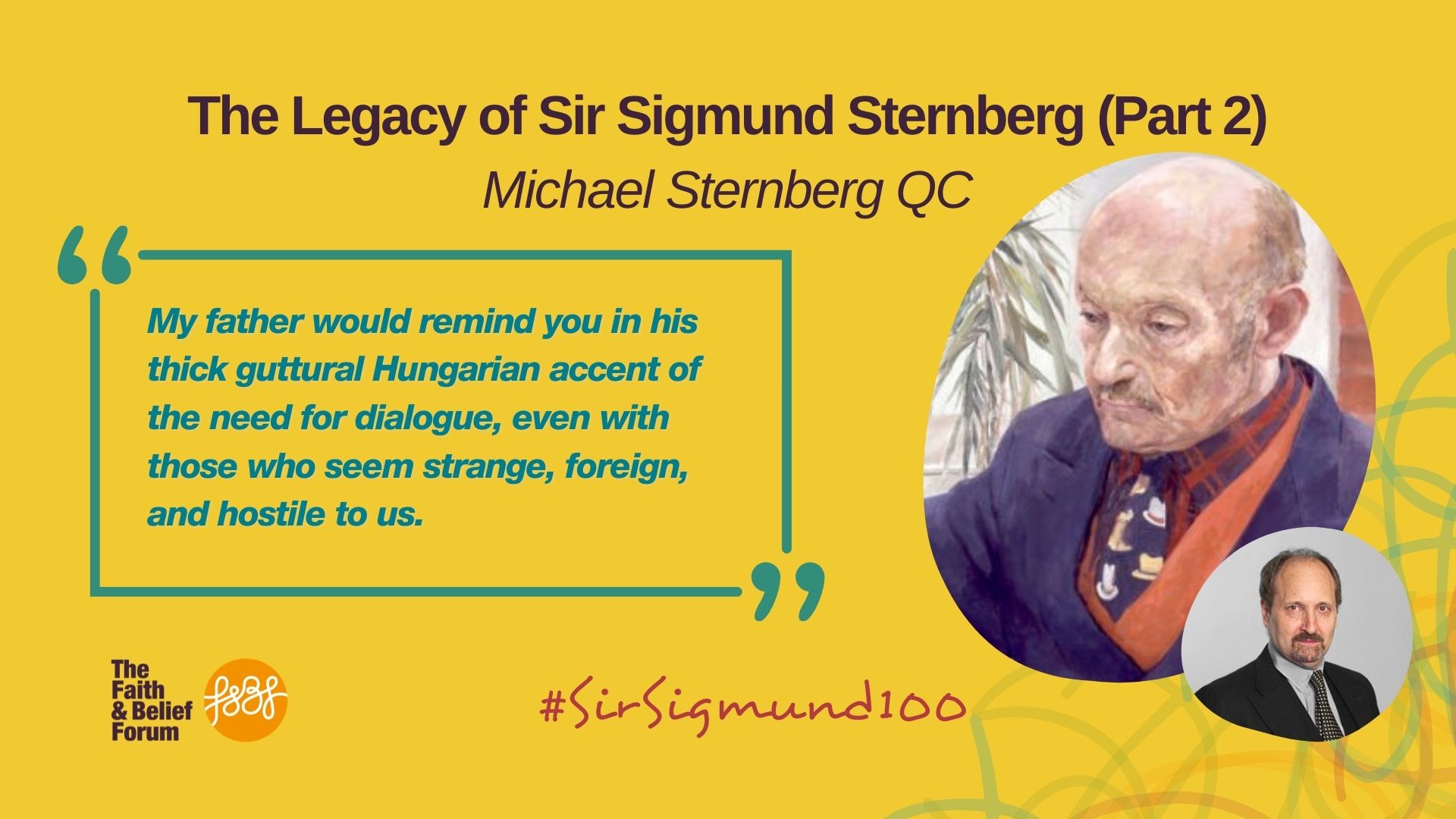 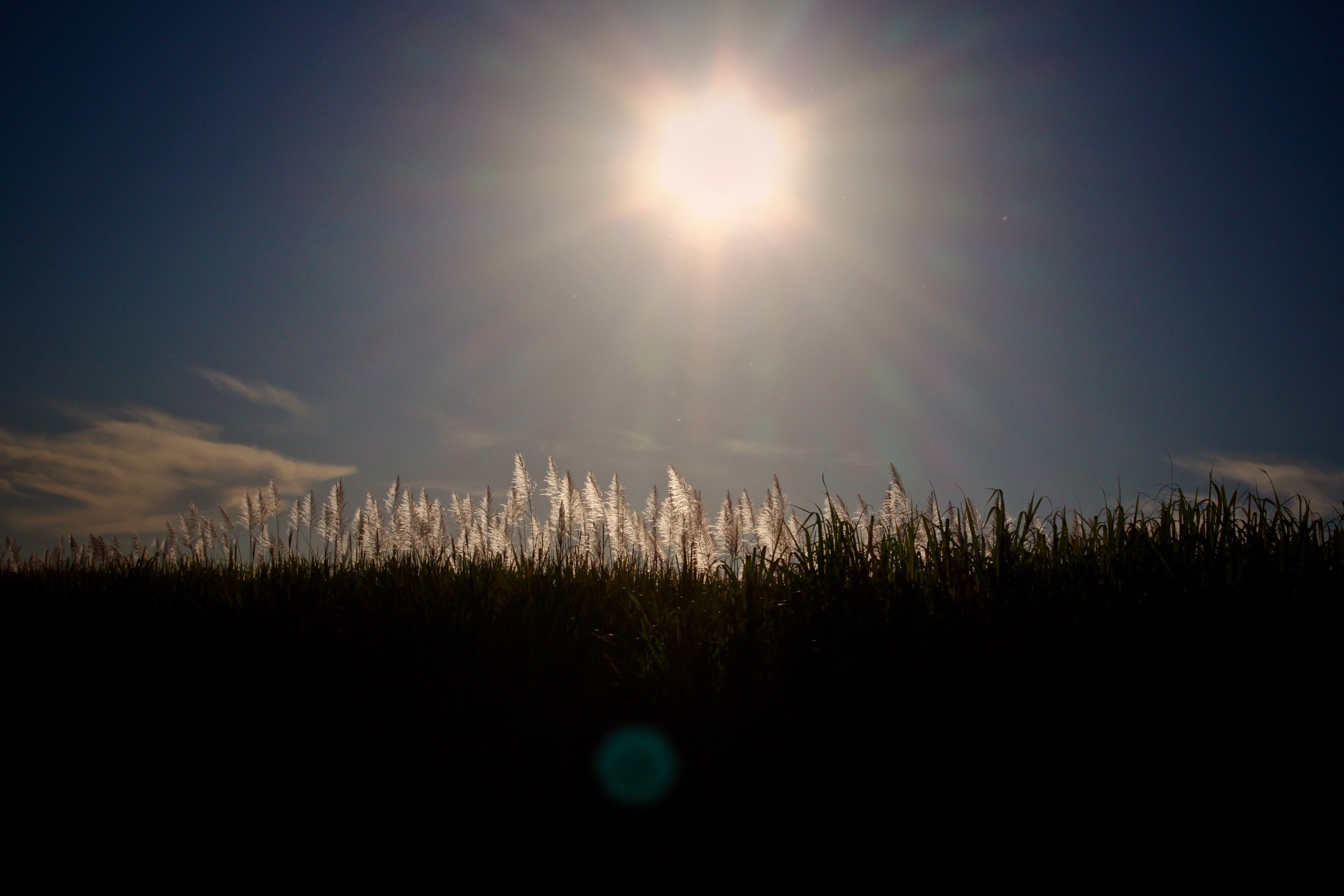