Today marks Holocaust Memorial Day (HMD) 2022, where we remember the six million people murdered during the Holocaust under Nazi Persecution and in the genocides which followed in Cambodia, Rwanda, Bosnia and Darfur. Today in particular marks 77 years since the liberation of Auschwitz-Birkenau concentration camp, where more than a million people were murdered.

For many people across Britain, learning and hearing about the Holocaust comes via textbooks, school trips and TV documentaries. I too had the privilege to meet survivors through visits to my school and volunteering at care homes for Holocaust survivors.

However, for me, growing up as a British Jew, it was my experience of the Holocaust through family testimonies, photos and lived experiences that was most personal to me. These were raw, all too very real and something that I will always remember and carry with me.

From generation to generation: Personal histories

Growing up Jewish as a third generation Holocaust survivor in modern day Britain, I knew my maternal grandmother’s survival story inside out. I’d heard the accounts from my family of having to board a crammed fishing boat from Denmark to Sweden to escape the death camps and start a new life in the Swedish countryside. As a refugee, she’d found a sense of safety but still never felt she was fully accepted by society as a Jew.

This also wasn’t an isolated story. It built on hundreds of years of pogroms, with my family being forced to flee across Russia and Europe, unable to fully settle and feel safe.

My grandma was persecuted for who she was, but it is her faith and cultural identity that has given strength through her most difficult times. This has inspired me greatly throughout my life. And yet, this is just a drop in the ocean of the variety of personal testimonies surrounding the Holocaust and subsequent genocides. I know my community is not alone in facing hate for who they are.

However, it wasn’t until when I went to Auschwitz at the age 15 that I fully understood the scale and impact the Holocaust had on so many lives, including the reality of intergenerational trauma.

This experience made me realise how lucky I am to be alive. I saw first-hand the ceiling-high piles of physical remains – bone, ash, teeth, hair, shoes and personal photos of loved ones and religious items like the ones I have at home such as Shabbat candles and mezzuzot. I saw the scale of the camps, whilst also being fully aware that this was just one of the many death camps across Europe.

Despite the immensely challenging nature of the trip, there were also however moments of inspiration that solidified by identity; from walking out the gates of Auschwitz, safe alive and able to practice my faith, to joining a spiritual Havdalah (end of Sabbath candle service) service at one of the sites, alongside my peers.

It felt liberating to know that the Jewish people had survived, despite all the odds.

Throughout my life I’ve learnt about the Holocaust and its impact on my family and my community. However, it wasn’t until I became involved with interfaith projects and the wider work of Holocaust Memorial Day Trust that I learned about the subsequent genocides that took place over many years since – showing how “never again” really had happened again.

Hatred for others is hatred – no matter your faith, ethnic background, sexuality, disability, beliefs or traditions. It poisons minds, hearts and wider society.

This why accessible and engaging interfaith and intercultural dialogue is so important. We need to break down barriers between people, build understanding, friendships, fight misconceptions and get to know one another.

With the alarming statistics about Holocaust denial rising globally, the time is now. In a recent study, 5% of UK adults did not believe the Holocaust took place and one in 12 believed its scale has been exaggerated.  This is combined with the shocking spread of scapegoating minority faith communities as blame for the pandemic over the past few years.

It’s therefore just as important as ever that we take positive action against hate. Thankfully, there are so many ways to get involved, including:

On a personal level, simply reaching out to a colleague, friend or acquaintance at a particularly challenging time, really can mean the difference between feeling isolated and unheard and knowing that there are others outside of your community that support you.

With rising hate crime and repeated terrorist attacks on places of worship – from the Christchurch attack in New Zealand and the Texas synagogue hostage crisis earlier this month – it’s critical that we reach out in solidarity.

Allyship is such an important part of what interfaith is about, and that is what I hope we take forward this Holocaust Memorial Day and beyond.

This year’s theme for Holocaust Memorial is One Day, and I truly hope for one day, no one will be persecuted for who they are and that we will forever all stand in solidarity with one another. 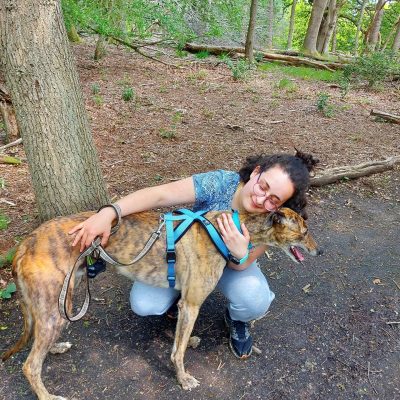 Josephine Davidoff is a young British Jew and interfaith activist, of Ashkenazi and Bukharian heritage.

She is deeply passionate about social inclusion and dialogue, as well as all things dog (greyhound) related!

She currently works as Donor Relation Assistant in the Income Generation and Engagement Team at F&BF.