All Saints Church and Hussainia Mosque

Geographically, All Saints Church and Hussainia Mosque are close neighbours, situated across the road from each other with only 50m between them. Both buildings are landmarks in the local community: All Saints was consecrated over 120 years ago and has been known as the “cathedral of the backstreets”, and Hussainia Mosque is one of the largest Shi’a Muslim centres in the country, functioning as a mosque and community centre.

In December 2020, F&BF partnered with The Feast to begin the ‘Building Closer Communities’ Project in Birmingham, with the aim of facilitating dialogue and relationship building between local faith and belief communities. Leaders from both places of worship responded to the invitation to be part of this project, and the church and mosque were then linked together due to their geographical proximity and shared neighbourhood. This particular partnership had a sense of continuing an existing relationship: some members of the church and mosque had already visited each other’s place of worship, and this project gave an opportunity for more focused dialogue and substantial engagement.

To co-ordinate their communities’ involvement in the project, Aubrey – a long-standing member of All Saints – and Zafar – the Imam from Hussainia – worked with F&BF and The Feast staff as volunteer ‘Community Connectors’. This meant attending three online training sessions, liaising with their communities, and running two ‘Linked Dialogue’ sessions which brought together 15 participants for online dialogue.

The first session focused on identity. In the feedback afterwards, some participants expressed their initial reluctance to attend and confusion over what the purpose of the session was going to be. Feedback received included phases such as: “I was reluctant at first”; “We were a little apprehensive to start with…but it ended up being a great session”; “[It was] not what I expected, but I enjoyed it.” This change in attitude from the beginning to the end of the first session credits the participants’ willingness to try something new, despite their uncertainties. The ‘identity cupboard’ activity was perceived as a positive tool to facilitate this openness. 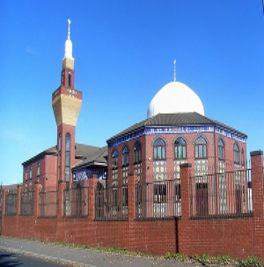 There was also clear appreciation for honest conversation during the specific challenges and opportunities brought about by the Coronavirus pandemic: “in such a time being able to communicate with other humans from the comfort of our own homes, discussing our differences and even discussing ourselves… having that room for introspection… How often do we get to sit and look into ourselves to the level that we did?” The session – which included an icebreaker where people shared about an object that was special to them – gave space and value to peoples’ shared struggles in the pandemic, and paved the way for greater empathy and understanding, which was clear to see as people shared their thoughts after breakout room discussions.

Three weeks later, the second dialogue session focused on experiences of community. F&BF’s map activity was particularly meaningful for these two groups: participants celebrated Birmingham and their local area by plotting places on a map of the city in response to statements such as, ‘Write or draw onto your map a place you connect with your faith, belief or culture’ and ‘Name a space that you feel is welcoming in Birmingham.’ Shared memories of places such as New Street Station, and more locally Small Heath Park, created a bond between people as they celebrated spaces that had been significant in their lives. This connection paved the way for further discussion in breakout rooms based around questions such as ‘What is it like to be a person of faith in the modern day?’

Moving away from the hesitancy of the first session, this time feedback included, “There’s a lot of resilience in the group” and “People are willing to share once they have the confidence to do so.” Although the group of participants was smaller this time, the atmosphere was one of deepening trust, demonstrating how the project has enabled people to ‘cross the road’, digitally at least in the context of the pandemic, and engage meaningfully with people from another faith whose places of worship share the same street.

The Feast’s Guidelines for Dialogue, a tried and tested toolkit for creating a safe, productive space for dialogue, provided the framework for conversation in both sessions as well as for the Community Connector training. In feedback at the end of the second Linked Dialogue, specific learning points related to these demonstrated the impact of this positive, clear framework. For example, “We all listen[ed] to each other and show[ed] respect” and, “We assume without realising we assume,” a reflection on the Guideline focused on in the second session: Do not tell others what they believe but let them tell you.

By nurturing and supporting the ongoing link between these two places of worship and their congregations, this project has given a framework for conversations and dialogue to take participants beyond their initial expectations of themselves, each other, and their ability to connect. The profound simplicity of reaching out as neighbours across the street is summed up in the comment, “We’ve met some lovely people.” One participant observed, “It’s not intimidating to have these discussions. I was initially reserved but this has shown we can have this kind of dialogue.” Both community connectors are proactively looking for ways they can work together. Looking to the future, this relationship has real potential to deepen, and to create lasting change in perceptions and interactions between people within the local community.

Share
To give you the best possible experience, we use cookies on this site. Find out more.