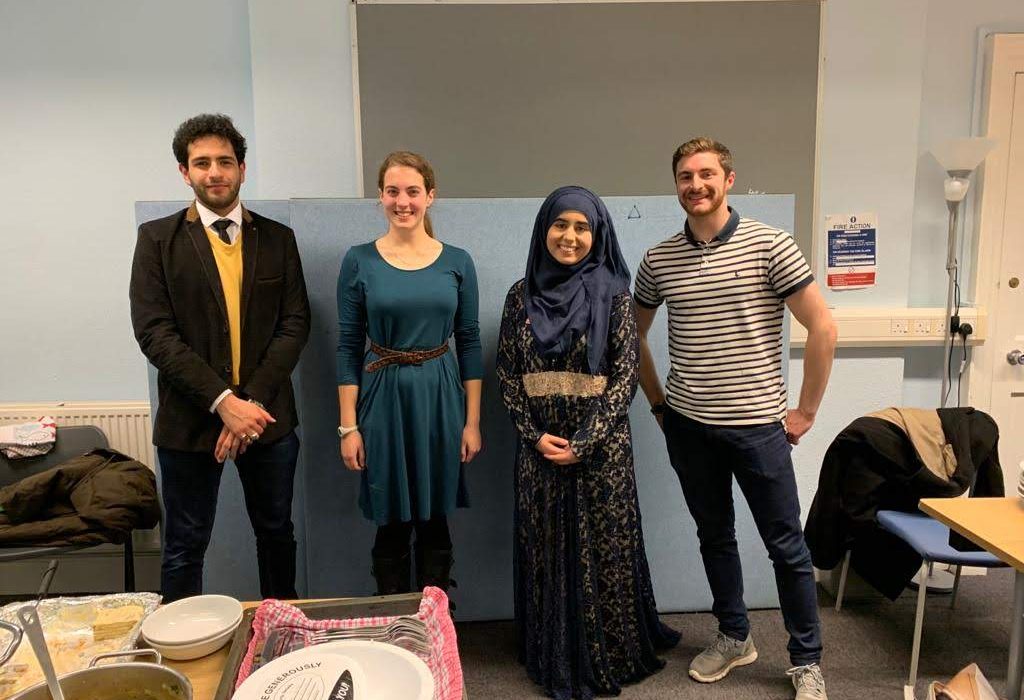 My interfaith journey started many a year ago in school during lunch breaks when one of the RS teachers held an Interfaith Forum. There were dozens of lunchtime clubs, but I was always drawn to this occasional gathering of a handful of us young keen beans with their takeaway lunches at 1:30 to talk about our faith and, for some reason or another, the conversation would almost always find its way to the non-Muslims asking about Islam. Eventually I also had the chance to give a presentation on some pertinent ethical issues that abound the typical popular discussion on religion and society – specifically those that relate to abortion and euthanasia.

Fast forward to 2017, I’m the vice-president of my university Islamic Society and I have the opportunity to visit a high school near my university to be part of an interfaith panel. The panel consisted of my Muslim self, a Buddhist, a Protestant, and a Catholic and we were grilled on (ironically) a range of ethical questions on topics like euthanasia and abortion from our respective worldviews.

I remember a couple of things vividly from that morning: 1) My tutorial was cancelled meaning I wasn’t late to the event, 2) the Buddhist on the panel had memorised some short surahs (chapters) from the Quran in Arabic (mind = blown, he even knew some things I hadn’t learnt, which was a bit embarrassing), 3) I was taken aback by the fact that my Catholic co-panelist, despite being not much older than me, had already decided to embark on the journey of becoming a priest (or, as I call it, ‘a full-time religious person’ – which, who are we kidding, is what I’m also trying to do in my own way). Here’s a little blast from the past, see if you can spot a baby Raahim.

Deepening my Knowledge and Living (inter)Faith

As I grew older the ethical dilemmas that had once been posed to me on either end of the classroom floor began to fall into the background. One factor leading to my abandonment of preoccupation on these issues was that I gradually gained something of a more holistic understanding of how ethics work and that morality doesn’t exist in a vacuum, it doesn’t float on thin air: whether we are cognizant of it or not, our morals emerge out of the worldviews (or, to be fancy, ontologies – essentially what you hold to be ‘real’ or ‘true’ about the nature of existence (: ) that we hold- that’s why I’m more interested in working that out and pondering on that before talking about the ethics that emerge out of it. This also came around when I started practising my faith more actively, departing from theoretical debate and difference of opinion, and attempting to gain consciousness of where God fits into my every moment and interaction, and starting to experience faith as a lived reality. This came after I barely managed to weather my way through a few storms and I thought to myself that it was time for me to start living according to what I believe to be true, and not simply just talk or argue about it.

This is part of the reason I now believe that when we are having ethical discussions and debates (something I’m definitely no longer a fan of)- the likes of which I often observed on the BBC’s The Big Questions during my school days- we are having the conversation at the wrong level. Or, at the least, to be able to discuss the branches we should at the very least first investigate the roots of our co-conversationist’s outlook on the reality of the world. My ontology, my worldview, was and remains one of a divine order, one of inherent meaning, and of each absurdity concealing transcendental wisdom.

So, whenever the opportunity arose, I began attending events at university where young people of faith shared not just their beliefs but also spoke about how those beliefs played into their lives and experiences.

Herein began my slow, but deep dive into the world of personal interaction and experiences of religious scripture, theology and eventually a little bit of philosophy, alongside a healthy dose of mysticism.

Scriptural Reasoning – It’s not as fancy as you think!

There were a number of influences in those years, from individuals I met to YouTube videos I watched, to university tutorials I actually occasionally attended, but eventually I found myself, a few weeks before Covid took the world by storm, in a scriptural reasoning group with a few fellow Muslims, several Christians and another Buddhist.

The discussions were varied, beginning first with topics like parallel creation stories or the tale of Joseph and his brothers. Eventually we opened up broad themes like forgiveness, leadership and the environment allowing us to research and select our own passages after having used pre-prepared texts while we found our feet (We even recorded some podcasts). We continued our discussions online into the pandemic and it was both thoroughly educational and enjoyable as we learnt about our shared beliefs, our differences and even amongst friends of the same belief, we found there often to be intricate differences of opinion. I personally benefited hugely as all this gave me the ability to look at my own scripture with a renewed passion, and a new lens, from perspectives that I had never before considered. The best part of it for me, however, was the relationships I developed – and they were deep relationships rooted in profound understandings of how we each view the world.

Sitting around a table talking about millennia old books might not be everyone’s cup of tea. Even if you’re a seasoned person of faith, when the people sat across the table speak the original language of the text or are trained scholars in their faith, it can become even more intimidating. Scriptural reasoning isn’t for everyone – but it can be.

There are plenty of techniques to make scriptural reasoning accessible including: having a moderator to ensure no-one overly zealous individual dominates, emphasising each individual to reflect personally on the scripture, and carefully selecting the topic and texts that avoid “high-theological topics” (at least, some of the time) and allow for personal engagement from non-experts. One particularly useful ground rule we agreed upon, based on those from this website, was that those who had knowledge of another language could not use their linguistic skills to shutdown discussions but rather to open up the conversation. Equally, if the group consists of a particularly studious scholars of faith, the texts and the ground rules they select can be chosen to suit the context and intended outcomes.

So clearly Interfaith, when done right, can be a powerful way to understand one another and grow closer – be it through scripture or sharing stories of personal experience. But can we take it further? Can interfaith change the world?

I believe so. Beyond the discussions I’ve had, I’ve met so many young people of faith at university and beyond who are passionate about social change, who are active in their local communities, who run food banks, tutor groups, community action and more – single faith based social action has been a reality for so long, but just imagine what we could accomplish if those groups came together – the results could be exponentially amplified.

I’ve found people who are keen about social action – and I’ve been able to bond with them through the fact we are both people of faith – are always keen to work together to further their impact. I once helped sell bagels outside the students union in the middle of the night with the JSoc (which was my first and last exposure to student life- even if it was only from outside- and let me tell you, it was an experience) and I’ve had Jewish and Christian friends come together for an interfaith charity dinner at university. Each of these experiences not only raised money for good causes, but brought us closer together in those few hours than any one scriptural reasoning session has managed to do on its own. My only regret is we never managed to organise an interfaith football fun day while I was still a student..!

That’s what we look to encourage at The Faith & Belief Forum through a number of our programmes, most prominently our ParliaMentors who have run dozens of inspiring interfaith social action projects across the country and I’m looking forward to seeing what F&BF inspires in the years to come as we continue to bring communities together, build bridges, and together build that future free from hate for which we are all individually striving.