There’s a concept in the LGBT+ community of chosen family.  The group of people we’re close to and consider family, even though we’re not related.

There’s a sadness behind this; a quarter of homeless young people in the UK are LGBT+, with 77% of them saying that coming out to their parents was the main factor.  This affects those growing up in both religious and non-religious households. (Visit the fantastic LGBT+ youth homeless charity akt for more information.)

This is why safe spaces for LGBT+ people of different faiths, beliefs and backgrounds are so special, and why, for National Interfaith Week, the Faith & Belief Forum was delighted to partner with Sarbat LGBT Sikhs, London Queer Muslims, OneBodyOneFaith, and Quaker Gender & Sexual Diversity Community, to host over 60 LGBT+ people and their friends, family and other allies, to celebrate together. 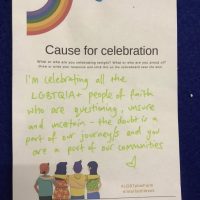 The event was opened by Faith & Belief Forum’s Siobhán Anderson, who has pioneered our LGBT+Faith work over the last three years and provided training to over 150 LGBT+ organisations and groups to support them to become more inclusive towards and meet the needs of LGBT people of faith.

Then we heard from our fantastic partners; Sarbat is a volunteer led group addressing LGBT+ issues from a Sikh perspective (and a winner in this year’s Faith & Belief Forum’s Community Awards!); London Queer Muslims, the UK’s  first Zikir & Islamic theology organisation run by and for queer Muslims; OneBodyOneFaith, which works towards LGBTI+ liberation and integration in churches in England; and Quaker Gender & Sexual Diversity Community (QGSDC) a loving, supportive community grounded in the Quaker faith. 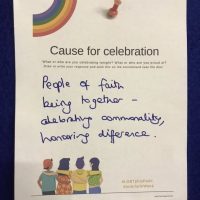 Guests had brought special objects and pieces of writing that illustrated their beliefs and their personal stories.  Around their tables, people shared hanukkiahs and hats, turbahs and tattoos, photos, holy books, and much more.  The objects sparked tales of family and of youth, of struggles and of celebrations, and of both the challenges and the strength that their faiths brought.

The conversations continued over vegan shawarma and the mocktails kept flowing long into the evening.  People shared with each other the things they had learned, and the tools they had collected, along their different journeys.  LGBT people from across our different backgrounds drew strength from each other.  There was an atmosphere of joy and solidarity.

By the end of the evening, connections had been made, contact details were being swapped, and bonds were being built, as we welcomed each other into our chosen families.